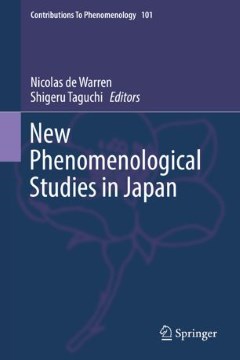 The development of phenomenological philosophy in Japan is a well-established tradition that reaches back to the early 20th-century. The past decades have witnessed significant contributions and advances in different areas of phenomenological thought in Japan that remain unknown, or only partially known, to an international philosophical public. This volume offers a selection of original phenomenological research in Japan to an international audience in the form of an English language publication. The contributions in this volume range over classical figures inthe phenomenological movement (Husserl, Heidegger, Levinas, Merleau-Monty), recent trends in French phenomenology, and contemporary inter-disciplinary approaches. In addition to this diverse engagement with European thinkers, many of the contributions in this volume establish critical and complimentary discussions with 20th-century Japanese philosophers.

How is time constituted in consciousness?

On the transcendence and reality of Husserlian objects

Neither one nor many

A Husserlian account of the affective cognition of value

Husserl on experience, expression, and reason

Phantasieleib and the method of phenomenological qualitative research

Martin Heidegger and the question of translation

Heidegger's transcendental ontology and his interpretation of Kant

Is this table of contents incomplete? Click here to add the missing references