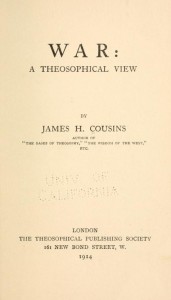 However, it is not as simple as making a strict division between mystical and non-mystical texts, for elements of mysticism seem to pervade many texts. Indeed, even in texts written by otherwise rationally-minded philosophers, historians and scientists, we find grand declarations which seem to overstep the bounds of rational thinking. Just as these war texts blur the boundary between propaganda and philosophy, they also often blur the boundary between mysticism and philosophy.

Perhaps one way to approach this problem of mysticism and philosophy in relation to the war is to take a look at some self-proclaimed mystical texts as a way to clearly identify what such a perspective entails.

Overt mysticism is something we find in abundance in Charles Webster Leadbeater’s An Occult View of the War (1916). Leadbeater was a prominent member of the Theosophy Society, a popular and influential spiritual group primarily based in India at the time of the war. Its parent organisation, the Theosophical Society, had been established in New York in 1875 by Helena Petrovna Blavatsky and others. After the death of Blavatsky, however, schisms had emerged in the movement with the most prominent branch relocating to Adyar, India and going by the name Theosophy Society – Adyar.

Broadly speaking, the aim of the theosophical movement was to create a ‘universal brotherhood’ uniting humankind, cultivating ancient wisdom (from East and West) and facilitating man’s evolution to higher spiritual plane. The movement had also attracted attention with its claims concerning the imminent arrival of the ‘World Teacher.’

However, other figures associated with theosophy also wrote ‘mystical’ interpretations of the war which are more accessible to non-initiates and which have rather interesting relationships to political struggles of the time. Indeed, what makes Theosophy particularly interesting in relation to the First World War is the key role played by some of its prominent members in the struggles for independence of both Ireland (James Cousins) and India (Annie Besant).

James Cousins (22 July 1873 – 20 February 1956) was an Irish writer, actor, critic, editor, teacher and poet. Along with AE (George Russell) and W.B. Yeats, Cousins had been part of the inner circle of artists stimulating the Irish National Revival. The work of Cousins and others played a key role in the cultural project of building ‘Irish national identity’. In 1915, Cousins travelled to India with his wife Margaret (herself a prominent feminist activist) and was active in Theosophy circles there, also forming a close relationship with the social activist and philosopher Sri Aurobindo.

Annie Besant (1 October 1847 – 20 September 1933) had gone from being a social activist with the Fabian Society and the Marxist Social Democratic Federation in the United Kingdom, to running a prominent branch of the Theosophical Society in India and actively campaigning for Indian Home Rule in a manner which strongly emulated the simultaneous Irish struggle.

Whereas Besant wrote prolifically and constantly about the war (the subject of a future blog post), Cousins wrote only one substantial text dealing with the war, his 1914 War: A Theosophical View. Unlike, for example, the aforementioned text from Leadbeater, Cousins’ text is relatively jargon free and aimed at a more general audience, and can serve as a good basis to explore a mystical approach to the war.

Fundamental to Cousins’ text is the theosophical idea that all things inhere in an ‘Absolute Unity’. However, this unity is not one of ultimate harmony, but rather the conflictual, dynamic unity of two principles; one of Substance, the other of Energy. Within the theosophical understanding of the progression of history, it is the combat between these principles that drives humanity towards ever-greater unity and higher spiritual accomplishment.

War, according to Cousins, is both the ultimate expression of the conflict of these principles, but also the ultimate creator of unity:

We had not to wait long for the evidence of the unifying progress within the nations themselves […] In a few hours from the declaration of war much of the system of unbridled competition was swept aside in the face of a common danger: the railways were centralised, mills taken over by Government, and the panic of selfish hoarding of foods and inflation of prices stamped out with the enthusiastic approval of those who, a month before, would have denounced such proceedings as an unwarrantable interference with the sacred freedom of the individual. (P.12)

Although this idea of war as unifying the nation is commonplace, Cousins takes the idea much farther than most by seeing this unifying power on a metaphysical plane as an essential force in the unfolding of human destiny.

Indeed, Cousins goes as far as to claim that for all the apparent evils of war, the process into which it draws mankind is fundamentally good:

We cannot regard these things as mere accidental goodnesses struck out of something essentially and entirely evil. They are signals to us that within the apparently evil there is a spring of good; that, indeed, if we have a sufficiently wide view of things, the good that is in evil is predominant, and will be seen so in due time. Hard as it is to realise this now, with horror piled on horror in our newspapers, it is nevertheless true, and will be seen so when this gigantic discord is resolved by time to a gigantic harmony. Seen in the perspective of history and in the light of Theosophy, war is not a fatal opposition between contending forces, but a vital co-operation between affinities in the vast process of human evolution. (P. 13-14)

Cousins also invokes a theosophical principle which can perhaps be summarised as “you reap what you sow”. He explicitly links this to the Hindu idea of karma, and on this basis makes what is, in the context of Anglophone interpretations of the war, a very uncommon remark about Belgium’s sufferings at the hands of Germany:

[I]t is not, I think, straining the matter too much to see the tribulation of Belgium as an ultimately regenerative sequel to the appalling atrocities in the Belgian Congo; not to mention the blatant immorality of the cities of Belgium, as reflected in the most degraded poetical literature that ever came from the press. (P. 16-17)

The standard view in Anglophone publications about the war was to use Belgium’s subjection for all the propaganda value it had. However, certain anti-establishment figures and anti-imperialists (the Irish Cousins and his countryman Roger Casement, for example), did not shy from pointing out that ‘brave little Belgium’ had committed its fair share of atrocities beyond its own borders. In Cousins’ mystical view, however, this takes the form of a divine retribution or cosmic justice, rather than merely being used to point out the hypocrisy of some of the Allied propaganda.

Following this idea of karmic justice, the idea of war as something which can ‘cure’ humanity of its spiritual ills develops gradually throughout Cousins’ text, culminating in a claim which can be summarised as follows: although the development of humankind can, and perhaps should, take place incrementally, mankind is nevertheless at too immature a stage of development to proceed thus. Therefore, what is needed for mankind to overcome its spiritual sickness is in fact cataclysmic destruction:

To eliminate the germs of disease normally would apparently take incalculable ages. But there comes a breath out of the mysterious region just beyond life; the fundamental disease of ignorance and selfishness is localised—in France before 1789 as aristocratic arrogance, in Germany before 1914 as militarist presumption. A surgical operation becomes necessary, and in the theatre of the cosmos is always successful. When disease is manifested, it is on its way to dissipation. When things called evil are thrown to the surface, they are ordained for destruction. When they are dragged or pushed into the light they have already ceased to be operative. (P. 19)

In this theosophical view, the First World War is to be both the apogee and the destruction of the disease of militarism, a drama played out with surgical precision and effectiveness in the theatre of the cosmos. Hindsight leads us, of course, to think of how the very opposite occurred, with the resentments of the First World War festering to give rise to the Second. To give Cousins some credit, however, perhaps he could argue that it was only when this militarism reached its true pinnacle in the Third Reich that the possibility for a ‘cosmic operation’ to cleanse humanity of militarism truly arose.

Cousins’ text is interesting for the insight it gives us into the diversity of interpretations of the war, particularly the manner in which anti-imperialism was facilitated within a spiritual, idealist narrative of mankind’s destiny, offering an alternative anti-imperialism to the materialist Marxist narrative, for example.